From 3forge Documentation
Jump to navigation Jump to search

Dashboards can be comprised of multiple files meaning components can be logically separated for independent management/version control.

Functionality can be marked virtual and overridden in another file, allowing for dashboard designers to abstract out functionality for custom implementation.

Components can safely be renamed and/or moved between files. The tool automatically updates and moves dependencies as necessary with naming conflict resolution.

Changes to a dashboard result in minimum/localized changes to the underlying file. Components can be set to defaults to avoid noisy/unintended changes.

By logically dividing a dashboard across files, Teams can simultaneously work on sub-components of the dashboard.

Scripts, datamodels, widgets and entire dashboards can be written once and then reused across dashboards.

As AMI files are managed by source control, they can be used to label versions of a dashboard, compare versions and manage branching.

Treat AMI files just like any other resources that are managed through deployment strategies, such as uDeploy, TeamCity, etc.

Users & dashboard developers can continue to develop/maintain dashboards without change. Changes are purely additive, existing functionality has not been changed nor removed.

Prior to Source Control Management (SCM), a Dashboard was backed by a single Layout file, so the terms were interchangeable. With SCM, a Dashboard can be an amalgamation of multiple Layout files so the distinction matters: 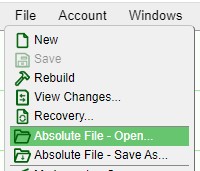 A layout file can also include pointers to other .ami Layout FIles (Dashboard > Included Layouts). This forms a Parent Layout/Child Layout Relationship.

A layout file can define panels that are not directly referenced in the dashboard. If a layout includes a child layout, all of the child layout's panels are hidden by default. In order to make a child layout's panel(s) visible, you need to specifically unhide it (Blank Window > Green Button > Unhide Panel). In effect, this is how linking a panel from one layout to another is achieved.

Please ensure this property is set before continuing: ami.scm.plugins=com.f1.ami.plugins.git.AmiGitScmPlugin

Navigate to Account > Source Control Settings, select the appropriate source control type and fill in your user credentials. The base path tells AMI where it expects files to reside which are managed under source control, including sub directories. (files outside that directory will not have source control functionality) 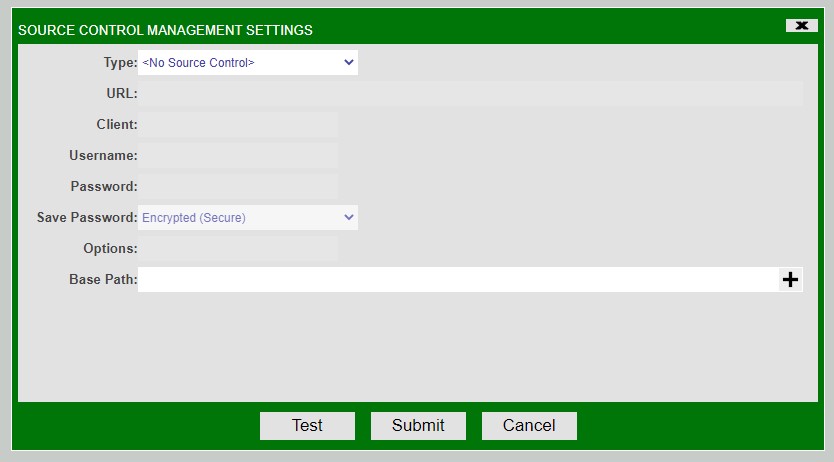 Traditionally, layouts could only be stored under “my layouts” or “cloud”. Now there is an “Absolute” (File > Absolute File - Open) option which allows you to load/save files anywhere on the host. If you wish to use SCM to manage a layout file, it should be located under the SCM base path (Account > Source Control Settings > Base Path). Tip: To move a layout from my layouts into SCM, simply load it (File > My Layouts - Open) and then save it under said SCM base path (File > Absolute File - Save As).

Link multiple files to a dashboard

To add an existing file:

Right click on the project > Add Child Link from > Existing File > select the file to add.

To add a new file:

Right click on the project > Add Child Link From > New File > Enter the name of the new, blank file to create.

Link to a panel from another file

Be sure the other file has been included (see Link Multiple files to a dashboard). Create a blank Panel (Window > New Window), click the blank panel’s green button > unhide panel > choose the panel to display

To Move a panel (and it’s dependent objects) from one file to another, click on the panels green button > Move to Different Layout > select the layout to move the panel to.

Several Resource editor tools are now organized such that there is one editor panel per layout.

All resources now have the concept of an owning layout:

View for seeing all relationships (Dashboard > Dashboard Objects). Note: This was added to allow access to hidden relationships, which is a new concept. A relationship is hidden if its source or target panel’s are hidden.

Previously an .ami json file was considered a fully-contained dashboard. Now, an .ami file should be thought of as a collection of resources such as panels, datamodels, code, etc. and can contain references to other .ami files. An individual .ami file is referred to as a layout. There are a few key points:

This is the file that was directly loaded (ex: File > Absolute File - Open) and is used as the “bootstrap” to determine which windows are loaded and displayed within the desktop.

A layout can include any number of child layouts such that each included layout must have a uniquely identifying alias. Note that the root Layout has no parent

Each layout (.ami file) within the dashboard is uniquely identified using an alias (note that when you attach a child layout, you are prompted to choose a unique alias). This alias is used to reference objects within the layout.

Because layouts can recursively include other layouts, it’s possible to have child layouts, grandchild layouts, etc. In this case the alias is constructed by dotconcatenation, ex: a.b.c

A layout file can be marked as read-only (Dashboard > Included Layouts > (right click) > Permissions). If the same file is referenced multiple times (as with the diamond pattern) then only one instance will be editable, and the others will be locked.

Previously, all panels where identified by a unique panel ID. Now, uniqueness is enforced by combining a panel’s owning layout’s fully qualified alias plus the Panel Id. Same goes for uniquely identifying datamodels and relationships.

Parent layouts have access to the resources of child layouts but child layouts do not have visibility to parent objects. This is an important concept that enforces clean modularization.

Because a dashboard can incorporate multiple layout files, it’s possible for the same method definition to exist in duplicate. Depending on where the AmiScript is getting executed, the appropriate version of the method will be run. For example, a parent layout could import two child layouts, each with their own onButton() method. Datamodels (or other resources) in child1 calling onButton() will get child1’s method and Datamodels in child2 calling onButton() will get child2’s version of the method. A subtle detail, if the parent layout did not define its own onButton() method and were to call onButton(), it will get the child with the higher priorities version… (See Dashboard > Included Layouts > (right click) > Move Up Higher Priority/Move Down Lower Priority)

A new, important Layout class has been introduced, which is used to represent each layout file loaded within the dashboard. The layout variable is automatically visible within AmiScript (like the session variable) and is associated with the layout that the AmiScript is owned by. This is important because it maintains relative consistency when referencing other objects with AmiScript. Note, this has replaced several methods from the session class and when loading old layouts AMI will automatically convert the code to use the layout object instead.

For example, let’s consider a layout B.ami that has two datamodels dm1 and dm2:

Inside dm1, if we want to get access to dm2 we would write:

Say that we have another layout A.ami that includes B.ami with the alias b and has its own datamodel dm0:

First, keep in mind the above code will continue to work because its inside dm1 which is owned by layout b so the layout instant represents b. But now, let’s say we want to get dm2 from code inside dm0. We could do either of these:

//I’m inside dm0, all three of these result in same value

The 3rd method is needlessly complex but highlights the relative nature of layouts and resources… We’re grabbing b’s dm1 datamodel. Then because dm1 and dm2 are in the same layout we can simply do getLayout(). getDatamodel(“dm2”) on dm1.

With regards to scoping, it was mentioned that AmiScript within a child layout does not have access to it’s parent’s AmiScript. While generally true, if the layout were to explicitly define a function as virtual and the parent layout were to also define the same method, then the parent’s function will get called instead. In the example below, if we were to call doit() in the child layout, we would see the alerts parent1 and child2 because test1() was marked as virtual, but test2 was not:

Connecting to an Excel Datasource

Our goal in this tutorial is to import excel data into AMI and create a visualization. In this example we have an Excel spreadsheet, sine.xlsx, with two columns: Degrees and Sine. 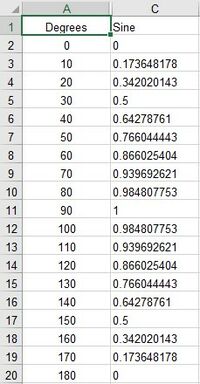 1. The first step is to add a new Excel Datasource. In developer mode, click on Dashboard from the menu and open the Data Modeler. 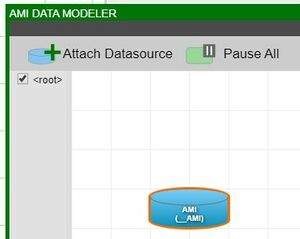 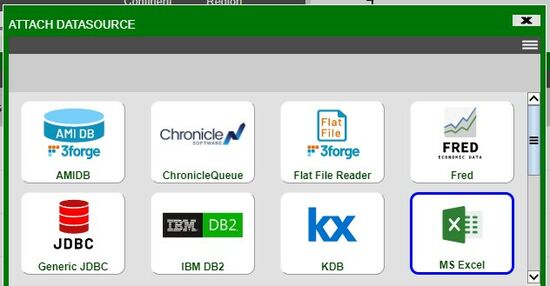 3. In the provided fields, fill out the Name and URL fields. In the Name field, put in the desired name of the new datasource. And in the URL field, provide the full file name (including the path) of the Excel file.

(Warning: prior to adding as a datasource, the Excel file must be closed and saved)

(Note: each sheet in the Excel file will be added as a table to the datasource) 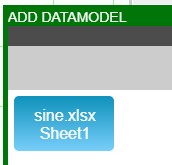 6. Once the datamodel is created, we can create a visualization (please refer to GUI > Creating Your First Visualization). In this example, we will create a line chart. In the wizard, select the appropriate variables for the X and Y axis (i.e, X: Degree, Y: Sine)

(Hint: on the right side of the wizard, click Refresh to get a preview of the chart or View Data in order to view the data that is being used) 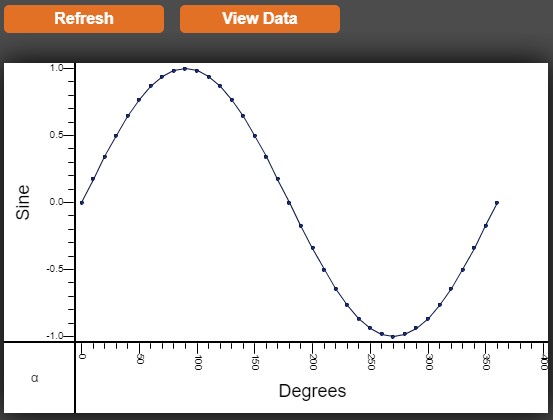 7. Click Finish in order to create the line chart based on the data in our Excel sheet

How to load Python Modules in AMI Script

To import python modules, place the import statements inside the python extern block.

By default AMI looks for Python Libraries in the lib/Lib directory of amione.

Alternatively, you can also set the JYTHONPATH environmental variable and AMI will load libraries from there.

How to use Python in AMI Script

Below is an example of how you can pass in variables and tables and modify and return them: